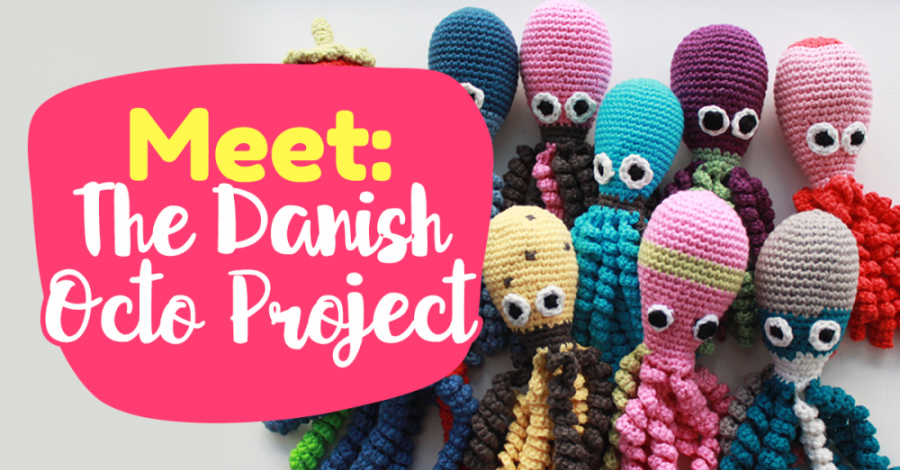 A popular charity knit amongst a sea of others, creating octopuses for premature babies has recently surfaced in the crafting community. If you’ve knitted or crocheted a preemie octopus do you know its origin, the faces behind the charity or even the science behind the cause? Surprisingly our hunt led us to Denmark to the coordinator of the Danish Octo Project Sidse Sachse, who shared with us the origins of this beautiful cause and the workforce propelling it worldwide.

Since 2013, the Danish Octo Project has donated more than 40,000 octopuses to hospitals in Denmark alone, but if you think that’s impressive, the organisation has also exceeded all expectations and now runs in over 40 countries.

To put that into perspective, one fifth of the nations on earth have been impacted by the work of this charity. So what is the theory behind it? Sidse shares, “The nurses have explained to us that they can see the effects of the octopuses on the babies.

Their heartbeats become more stable, and their breathing improves. The babies behaviour is calmer and fewer will try to pull on their wires and tubes.

Instead they are holding onto the tentacles of the octopus, which replicates the same shape as an umbilical cord.” Yes, amazingly these knitted or crocheted toys offer more than just a cuddly comfort to a preemie, but actually help to recreate the sensation of being inside a womb. Sidse tells us this began with a father who requested a knitted octopus from a Danish blogger for his premature baby, who later shared the good results.

“The lady started making octopuses for a hospital in Jutland, and after three months, the octopuses were in all the hospitals in the country.”

Six years later and despite the mass growth in the organisation operating globally, the core team putting in the legwork remains rather small. “We are made up of 15 ambassadors,” says Sidse.

“All women apart from one man who is our webmaster! We are all volunteers.”

The way it works is essentially a large web of ambassadors across every hospital involved in the scheme.

“The ambassador receives the octopuses from all the octopus-makers,” explains Sidse, “They wash and sort them so they’re safe for the babies, then pack them in a bag with a little card welcoming them into the world.”

Sidse reassures us that any octopuses that aren’t quite safe enough for preemies are donated to the babies’ siblings or other hospitalised children. Whilst some ambassadors have lived through the worry of having a premature baby or share experiences through friends and family, some have not. What unites them says Sidse is their, “compassion and love for premature babies and their families.”

The generosity of the cause doesn’t just stop there.

“We have a project connected to Octo for preemies – it’s called Octos for angels.

It’s for the parents and families of stillborn babies or babies that sadly pass due to illness,” says Sidse. “The parents are offered two identical octopuses, one for themselves and one for their child, which are then exchanged when the baby is buried to help cherish the familiar smells and precious memories.”

Sidse expresses how such a simple act can have a heartwarming effect on those in their time of need.

“We are so grateful to be a part of this project, but depend on the great work of our volunteer octopus-makers.”

She adds, “We’re so thankful and couldn’t do it without them.” A humbling reminder to those that donate that somewhere out there in the world, your knitted octopuses are appreciated more than you know.

Looking to join the cause?

You can download the UK knit or crochet patterns for the octopuses at spruttegruppen.dk/recipes, visit the Official Octopus for Preemies UK Facebook page or contact octoforapreemieuk@gmail.com for more information. Remember! Any yarn used must be 100% cotton.