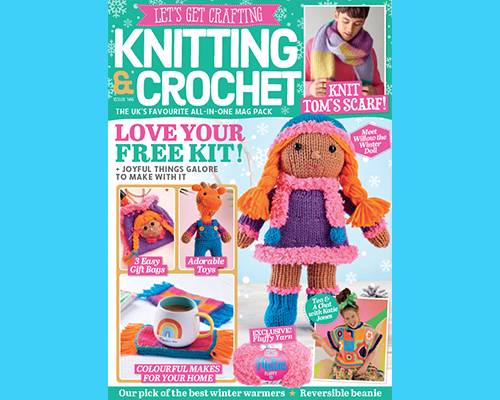 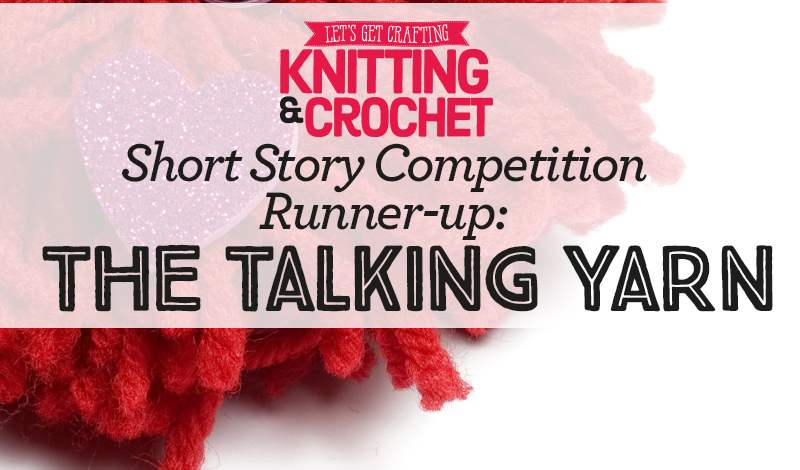 When LGC Knitting & Crochet magazine recently launched its annual short story competition in issue 70, the team was overwhelmed by all of the great entries we received. We had a tough job deciding after reading all of your excellent tales! Here, we have a charming story from one runner-up, Valerie Reilly, who brilliantly describes the kooky world that comes with being a knitter. Thank you Valerie!

“My inspiration for the story came when I read the third of the three suggested opening lines. The second sentence just popped into my head, because working with yarn is much more complicated than just ‘knitting or crochet.’ I liked the idea of the yarn speaking because we often say a particular yarn or pattern is crying out to be used, and knitters and crocheters are inclined to talk about the danger of their stash in particular taking over their houses. All of that went into the mix when I wrote my story!”

Gazing up at the shelves, I muttered to myself “Knitting or crochet?”

“Yeah, ‘cos it’s that simple, isn’t it?” said a soft, rather dry voice at my shoulder. I turned around but could see nobody there. Shaking my head, I reached for a lovely cashmere and silk yarn in a pale lilac shade.

“Tunisian crochet,” the voice said and I froze, my hand stretched out mid-air. “It’s practically knitting, with a needle that’s more of a hook.”

I looked around again. No one was anywhere to be seen. The owner of the shop was deep in conversation with an older lady looking at tapestries. There was nobody else there, except… one of the red hanks of wool in a pigeonhole to my left seemed to be moving. This had to be a practical joke… you know, the kind that is set up with a hidden camera to catch the unwary. I had to admit it was clever though.

The skein of yarn - a deep, rich crimson - folded itself up so that its two ends hung over the shelf, looking for all the world like little legs, while another skein folded and twisted until it became what looked like a body and woolly arms, and a final one rolled around until – and you’ve probably guessed by now – it became a head.

“Not as weird as this,’ I said, looking directly at the small red figure. It quivered briefly, then drew itself up and said, “Well, you can’t just say knitting or crochet, can you? There are so many more possibilities.”

“I’m not taking advice from a ball of wool,” I announced firmly, and put my hand on the lilac yarn.

“Really?” the husky voice questioned. “You’re going to pass me by for pastel cashmere and silk. I’m pure new British wool, you know. And red.”

The ball of yarn under my hand moved and I jumped back. “I’m silk and cashmere,” a sweet small voice piped up. “I have wonderful drape and excellent stitch definition.”

“I beg to differ,’ a deeper voice said this time, still husky and dry. It came from a chunky green ball on one of the lower shelves.

“That’s it!” I said decisively, and turned to go.

The older lady who had been looking at the tapestries was just behind me. She was wearing a hand-knitted scarf in a particularly beautiful sky blue that brought out the blue in her eyes, which were twinkling at me.

“Definitely,” I declared. “The yarn is starting to speak to me. I think maybe it’s time to begin patchwork or embroidery.”

“I know what you mean, dear,” she replied, smiling. “Sometimes it’s as if a particular colour or texture just cries out to you. That’s how I came to knit this scarf.”

“It’s really lovely,” I said, reaching out to touch it.

“So what colour is speaking to you today?” she asked, looking over my shoulder.

I reluctantly turned back, stifling a sigh.

“The red, even though I wanted to use the lilac one over there,” I said, glancing nervously at the red yarn. It sat unmoving.

“And what do you want to make?” she asked.

“I have no idea,” I replied, but immediately the red skeins wriggled and twisted again, looking as if a woolly scarf was being tossed over the little figure’s shoulder. So, shrugging my shoulders, I replied “A scarf, probably.”

The figure nodded vigorously. There was no doubt this was a clever trick. The lady looked at the yarn, then at me.

“What a good choice,” she said. “I think that colour will suit you so well and it’ll be a change for you.”

“I suppose it will,” I said, “but I still think I’m going to look at the fabric and try patchwork. I’d hate to take the yarn home and find it talks to me. What if all my yarn began to talk? I’d be deafened.”

The lady laughed then and I joined in, realising the absurdity of the situation. This was clearly a marketing ploy and I would read about it on Facebook or in the local paper. I could see the headlines already, ‘Local Knitters Taken In By Wool Shop Scam.’

“You’re right, I’m being silly. I love knitting and crochet and I’m not going to stop just because of whatever it is that’s going on here.”

“Not quite,” I replied, remembering my first thought when I had come in for wool. “Which will I do then? Knitting or crochet?”

“Well, you decided on the colour by listening to the yarn, so maybe you should do the same now,” she said, smiling.

I looked at the red yarn, then, thinking I’d better enter into the spirit of the joke, asked, “Well, red wool? What do you think?”

The yarn looked at me for a long moment then lifted both little woolly arms and made a knitting motion.

“I’ll knit,” I said, and lifted two red skeins from the top of the pile, ignoring the muffled grumbles and thinking how I’d definitely messed up their trick now.

I arrived home, full of enthusiasm for knitting the scarf. Nothing compared with the joy of beginning a new project, whether it was with a hook or needles. I opened the door to the craft room and tossed the bag on to my chair while I took my coat off. It sounded for a moment as if there was a faint squeak coming from the bag but that couldn’t happen, surely. I mean, yarn doesn’t really speak to us, does it?

“Here, the popular idea that yarn can talk and inspire projects in a keen crafter is nicely dramatised with a magical twist. The woman’s conviction that it must be a hidden camera prank adds humour to the story and hooks the reader, who can imagine the fear of being tricked. It’s also amusing that the heroine and older lady are talking at cross purposes, since the older lady still seems to think that the yarn speaking to her is just a colourful metaphor for inspiration, although we can’t quite be sure. The squeak from the yarn bag is a lovely ending!”


To see our winning entry, pick up issue 73 of LGC Knitting & Crochet, on sale now. Find out more here.