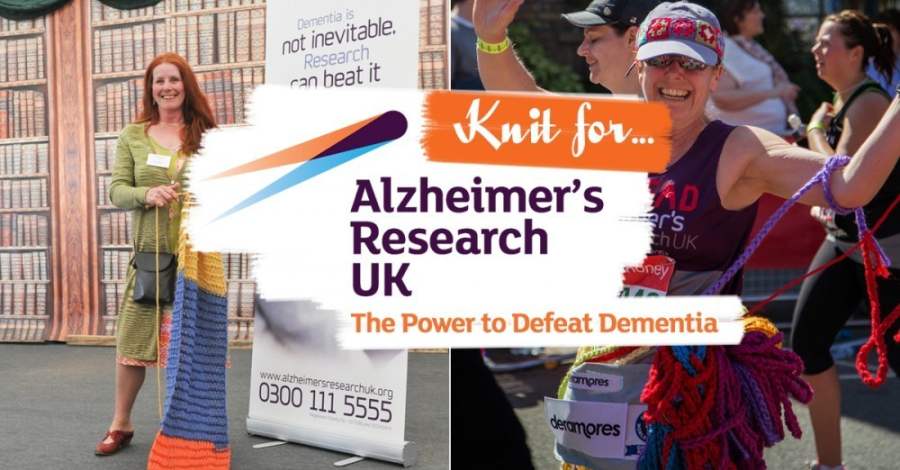 Susie Hewer is a special woman who has raised tens of thousands of pounds for Alzheimer’s Research UK, in memory of her mother Peggy – who died with dementia in 2005. She has since given her cause a crafty twist, through knitting and crochet.

Susie Hewer is no ordinary 58-year-old. Since 2005, she has run more than 60 marathons and become the first person to achieve the Guinness World Record for the longest scarf knitted while running a marathon. We spoke with Susie to find out more about her cause…

“I began running marathons at the age of 48. My mum, Peggy, died with dementia that year and I wanted to raise money for the charity, Alzheimer’s Research UK, to help combat the condition. The idea to knit started in 2007. I’d been running marathons for a while, but wanted to do something different at the London Marathon that would attract attention to this wonderful charity.

“When discussing ideas with a friend, she suggested that I should act my age and ‘stay at home with my knitting’! So I decided to take my knitting with me. My mum taught me how to knit, so it seemed fitting to knit when running in her memory. I established the Guinness World Record for ‘longest scarf knitted while running a marathon’, and I later gained the record for ‘longest crochet chain while running a marathon’. “Running and knitting at the same time can be quite tricky! I wear an apron in which I can put the yarn I’m using at the time. The rest of it is tied around my waist. I’d be lying if I said it was comfortable because it isn’t, but I just put up with the pain because it’s all for a good cause.

“I enjoy the meditative element of crafts. The rhythm of the hook or needles, the feel of the yarn through my fingers and the way you can forget all of your troubles and lose yourself completely in what you’re doing, with the bonus of producing something wonderful and unique. “My husband Mike and I didn’t notice my mum’s dementia at first, as she lived with us and we saw her every day. She’d had a series of mini-strokes and was a bit forgetful and occasionally left her glasses in the fridge but then things got dramatically worse. She began to see imaginary people – children hiding in the wardrobe, Russians sitting on the stairs. She would shout at them and throw things too.

“She was so convincing, Mike and I used to go and check there wasn’t anyone there. My gentle mum changed into a furious and aggressive person. It was terribly distressing. “I cared for my mum at home. She became incontinent and incapable of doing anything for herself. She didn’t sleep for more than 30 minutes at a time and I’d be up three or four times a night. Life became unbearable. In the end I went to the doctor and told him I couldn’t cope any more. Arrangements were made for mum to go into care and that’s where she spent the last few months of her life. It broke my heart.

“People might think I’m crazy running all these marathons, but having watched my dear mum gradually fade away with vascular dementia, I can’t rest until I have raised more money for research into this dreadful condition. I’ll continue running for as long as I can.” You can follow Susie on her blog at www.extremeknittingredhead.blogspot.co.uk

Want to help raise money for Alzheimer’s Research UK but not quite ready to run a marathon? All proceeds from this Knit your own Bear kit go straight to the charity. Visit shop.alzheimersresearchuk.org The charity is currently supporting dementia research projects worth over £33 million in leading universities across the UK. For further information about Alzheimer’s Research UK, or to find out more about fundraising for the charity, call 0300 111 5555 or visit www.alzheimersresearchuk.org

Find out more about dementia and how it affects the brain in this video with Christopher Eccleston: