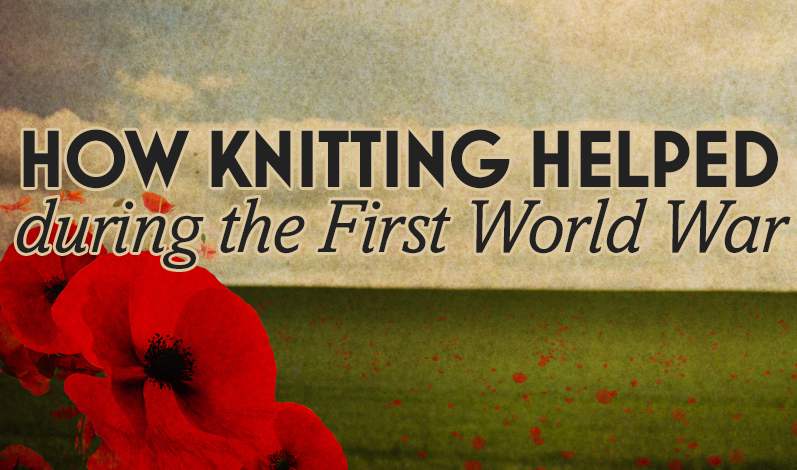 How Knitting Helped During The First World War

We’re always looking to do our bit for Remembrance Day on 11th November – it’s a time to not only remember our beloved troops, but honour those who contributed in other noble ways.

To find out more about knitting during this time, we spoke with expert Barbara Smith; who as an avid member of the UK Knitting and Crochet Guild and author of Knitting Now and Then blog, has a strong interest in knitting history and much expertise on the subject. On her blog, Barbara provides insights into knitting over time - particularly during the 19th and 20th centuries - and documents some of her other knitty activities and interests.

What led you to research knitting and crochet during WW1?

It was the approach of the centenary in 2014, and something I read in Richard Rutt’s book, A History of Hand-knitting. He writes about knitting comforts for soldiers and sailors, stating that ‘The First World War stimulated British knitting to the point where it was regarded as a national mania.’ I thought it was a rather striking statement, and wanted to investigate further.

Is there much out there in terms of resources?

There were many needlecraft magazines at the time that included knitting and crochet, such as Weldon’s Practical Needlework, The Lady’s World Fancy Work Book and Fancy Needlework Illustrated. We have several war-time issues of these in the Knitting & Crochet Guild collection. There were also many women’s magazines, including Woman’s Weekly (which started in 1911).

I consulted some of these in the British Library, to see what knitting and crochet patterns they were publishing. Some of the spinners, notably Baldwin’s of Halifax, published booklets of patterns for knitted comforts. You can also get glimpses of knitting activity in newspaper archives, many available online. 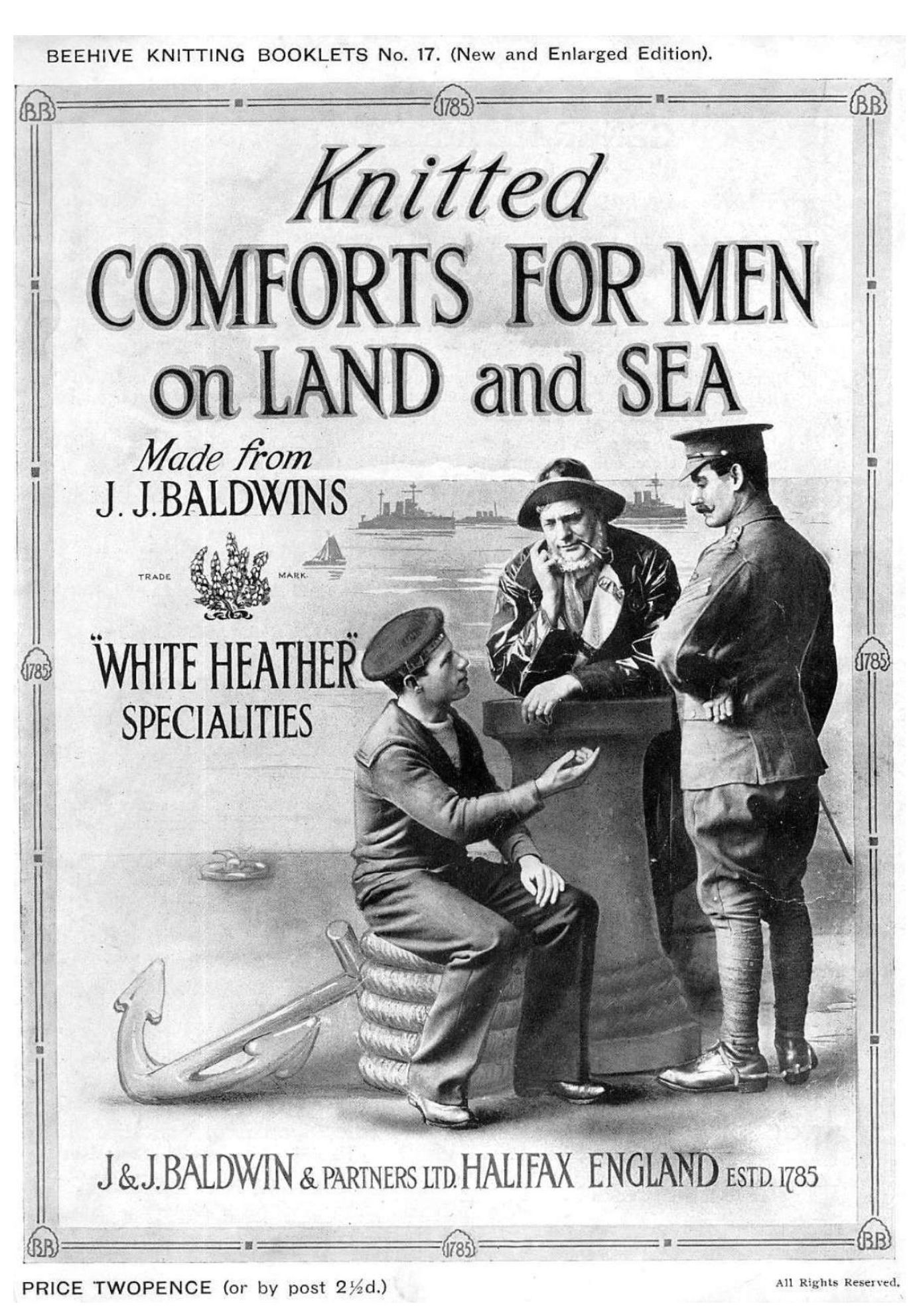 What role did knitting and crochet play during WW1?

In the first year of the war, there was a frenzy of knitting comforts for the troops. There are reports in the newspapers that ‘Everyone’s knitting’, and Punch cartoons mocked the efforts of novices to knit socks. But, you also get hints that it was quite chaotic – a lot of duplication and waste, and also gaps in provision. Punch, again, had cartoons of soldiers being inundated with comforts, and there were stories of socks being used to clean rifles. In October 1915, the War Office took control and appointed Sir Edward Ward as Director General of Voluntary Organisations. Thereafter, he specified what knitted comforts were required.

In many of the needlecraft magazines, the war is hardly mentioned after 1914. Some of them published an issue with patterns for comforts early in the war, and then apparently considered that they had done enough. They reverted to their usual mix – mainly, patterns for babies’ and children’s clothes, and crochet for the home. Occasionally, the war is evident in patriotic crochet designs for things like tea-cosies and tablecloths, with flags and slogans like ‘Success to the Allies’, and perhaps battleships or guns.

Who knitted? Any social groups in particular?

It’s hard to tell, now. The knitting groups were evidently run by leisured ladies, who had servants. They were already running charities for the poor at a time when there were no state benefits, and extended their activities to cover new groups during the war. But I’m sure they weren’t doing all the knitting themselves. Some counties had funds to provide wool for knitters who could not afford to buy it, so that people of all classes could knit comforts in organised groups. Women everywhere would have knitted for their own menfolk – husbands, sons, brothers, sweethearts.

What type of patterns were frequently knitted?

After Sir Edward Ward took charge, knitting for the troops was more prescriptive. In 1915, he asked for mufflers and (fingerless) mittens only, to specified dimensions, although other items such as socks were added in the following winters. Until then, published patterns were very diverse. I particularly like the Balaclava helmet patterns - some had ear-flaps so that ears could be uncovered during the day, or covered for sleeping; others had chest-warmer panels, front and back. 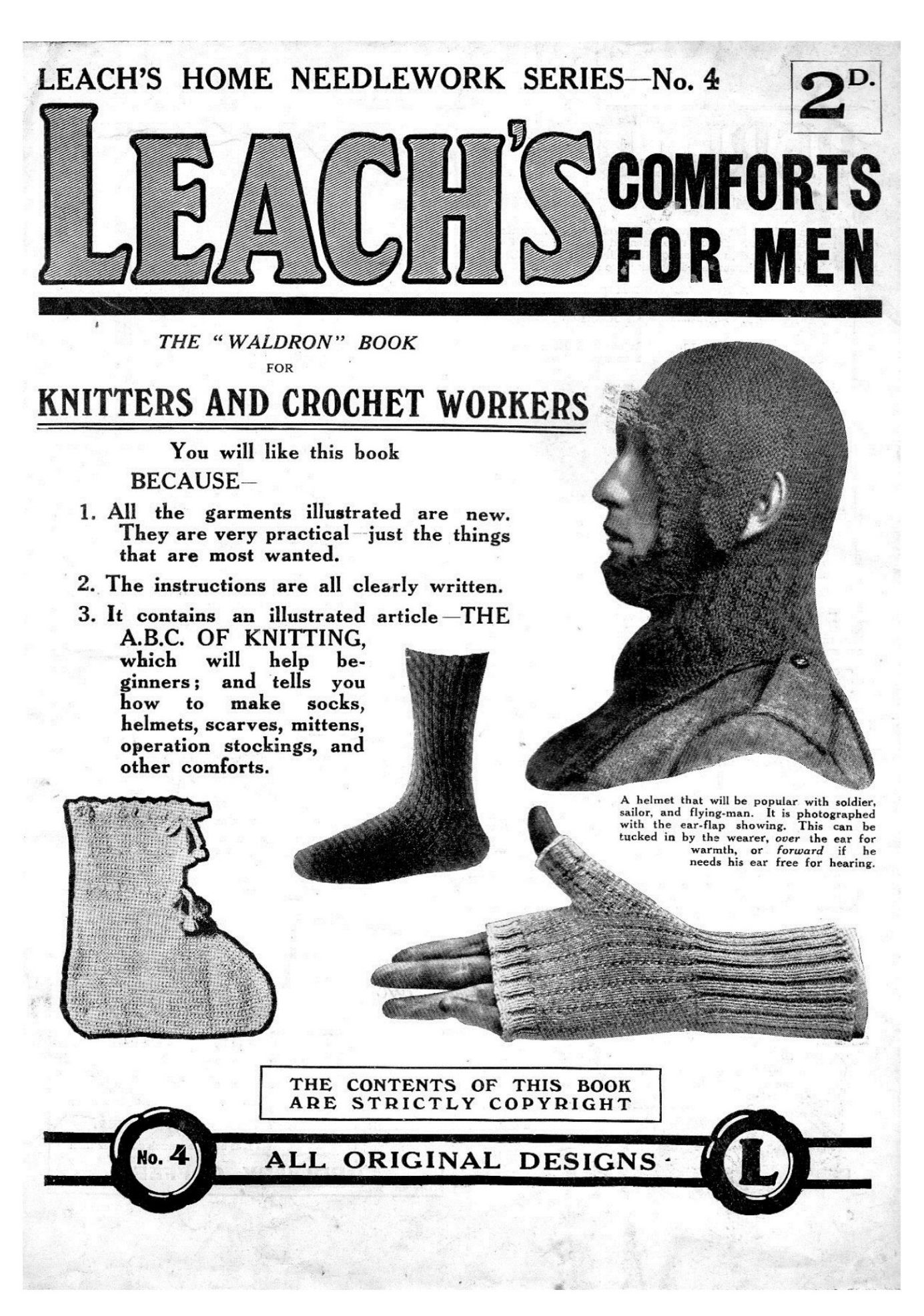 But, although socks were not asked for in 1915, they were probably the most commonly knitted item. Soldiers got through socks very quickly and in the trenches, fresh socks would help keep feet dry. I read a war-time Woman’s Weekly serial in which the heroine meets a handsome captain with no family, who says he must be the only man in the Army who has to buy his own socks. She offers to knit them for him - and, as you would expect, they get married in the end!

Could you tell us about your talk, Useful Work for Anxious Fingers?

The title comes from a Baldwin’s ad for the Knitted Comforts for Men on Land and Sea booklet – it expresses so well that knitting was a comfort for the women at home, as well as the men. I talk mainly about knitting comforts for the troops, but also about the patriotic crochet designs in magazines. I show a few artefacts, too - a tablecloth that has survived from the war, with ‘Welcome Home’ worked into the filet crochet border, and a little crochet handbag that I made to a 1917 Woman’s Weekly pattern, in the colours of the King’s Own Yorkshire Light Infantry, my Grandad’s regiment.

In the aftermath of the war, did knitting remain popular?

Yes, definitely. The 1920s saw a ‘jumper craze’, and Richard Rutt attributes that partly to knitters carrying on after the war. Before 1914, knitting had been mainly practical – warm underwear, baby clothes, boys’ jerseys and so on. By 1910, knitted sports coats for women were becoming fashionable, and the war reinforced their popularity. You can see a change in the needlecraft magazines, too. Before the war, there was far more emphasis on crochet than on knitting, and after the war that was reversed. 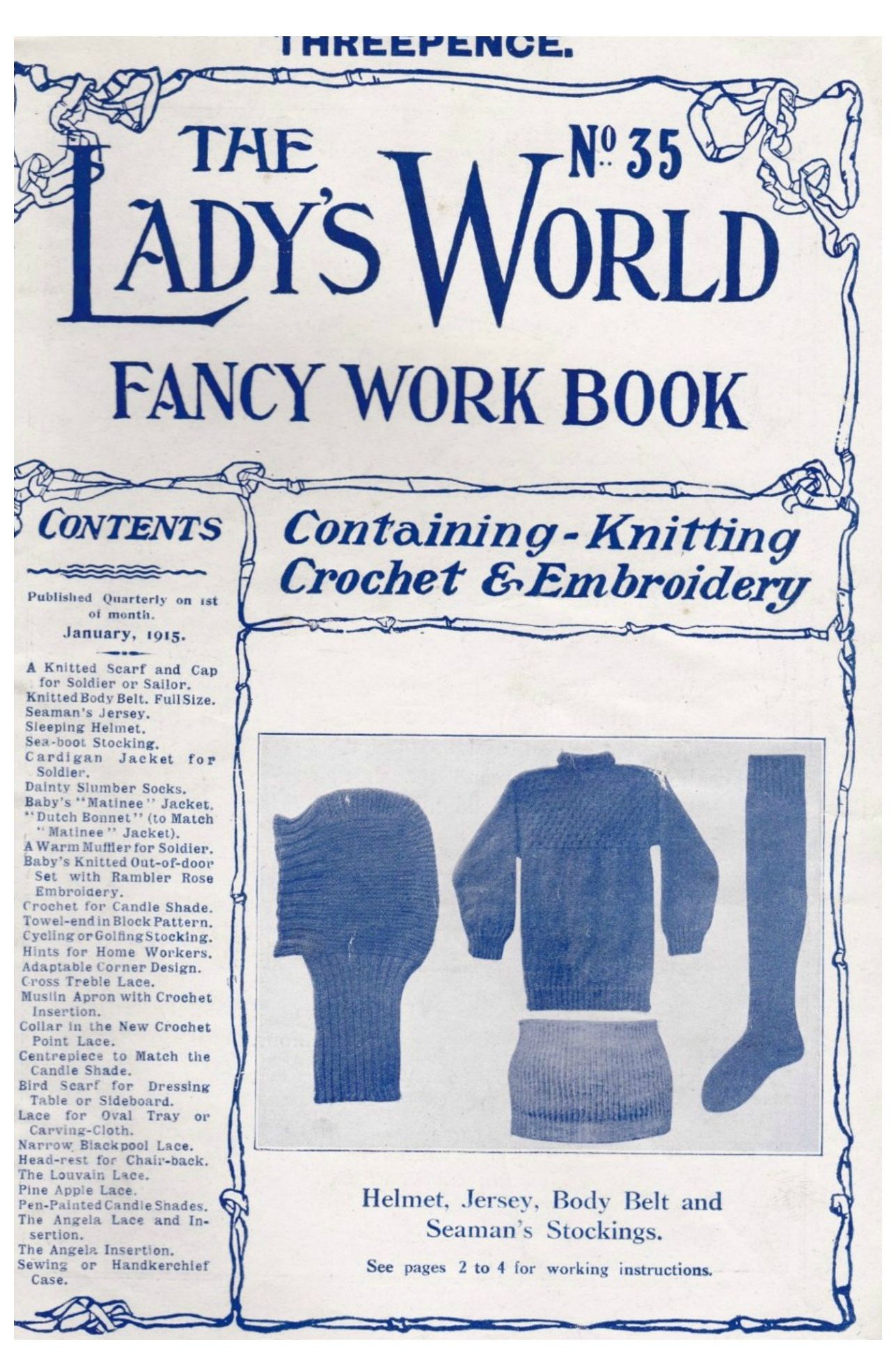 Could you tell us about the Knitting and Crochet Guild?

The Guild is a national organisation, founded in 1978, to support the crafts of knitting (hand and machine) and crochet. Members are not all experts – I am a duffer at crochet, for instance - but are keen to develop their skills and learn more about their craft. We have a quarterly magazine, an annual weekend convention, and a very active Facebook group. Personally, I am most involved with the Guild’s collection, which has been put together, mainly by the members, over the past 20 years or so. It consists of about 2,000 knitted and crocheted items and an enormous number of publications, including books, magazines and around 50,000 pattern leaflets.

We have displays of collection items at events like The Knitting & Stitching Show, and put on ‘trunk shows’ - on a theme like arans, Fair Isle, or Irish crochet, for groups around the country. Where copyright allows, members can have copies of pattern leaflets or download publications from the Guild website. There are Guild branches around the country, too – my local branch in Huddersfield meets once a month, and we have a topic for each meeting, often a workshop run by a member. Sometimes I show items from the collection – a recent meeting featured some wonderful doilies, both crocheted and knitted.

What else do you talk about on your blog Knitting Now and Then?

I started the blog when I started knitting again after a gap of 25 years, to write mainly about my own knitting. Shortly after, I joined the Knitting & Crochet Guild. Now, I often write about things I have seen in the Guild’s collection while working as a volunteer – whether it’s quirky, fascinating, beautiful, or intriguing.

Why does the history of knitting speak to you?

I love old knitting patterns, especially from the 1930s – some of the designs are so stylish, and still look good now, if adapted for modern yarns and body shapes. Since I have been working on the Guild collection, I have learnt a lot more about how knitting developed – it’s fascinating to see, for instance, how some of the Shetland lace patterns have been re-used in different ways, over decades, or how knitted woolly swimsuits became popular and then (thankfully) disappeared.

To find out more about knitting throughout history, visit barbaraknitsagain.blogspot.co.uk and kcguild.org.uk