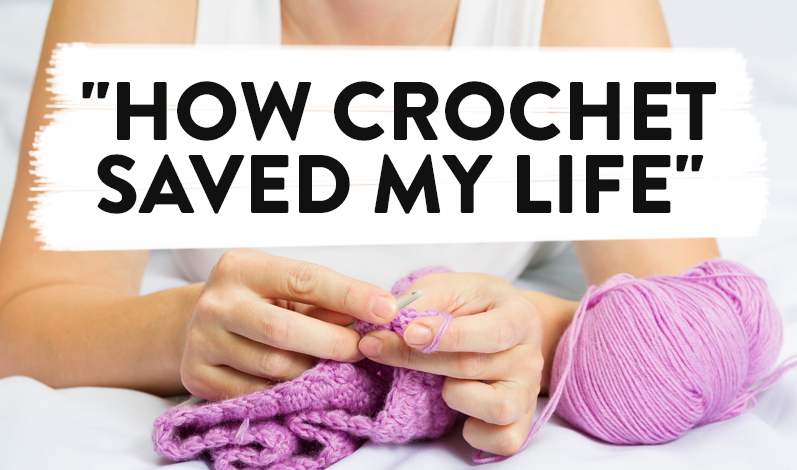 “How Crochet Saved My Life”

There’s no denying the therapeutic benefits of crafts like knitting or crochet, and these are gaining momentum and recognition in all walks of life. We spoke to Kathryn Vercillo of Crochet Concupiscence blog, to hear how crochet changed her life for the better.

Kathryn Vercillo is a writer and crochet lover, based in San Franisco. She was taught how to crochet by her mother as a child, but didn’t stick to it and re-taught herself in her twenties. Now, she celebrates the craft for its healing qualities, and is keen spread her message both in the crafting community and with those outside it…

Hi Kathryn. What inspired you to write Crochet Saved My Life?
Crochet helped to save my life in my late twenties, when I was going through my worst period of chronic depression. I often couldn’t even get out of bed, but I kept trying to do something creative. This was was when I found crochet, which of course was something I could do from my bed. It slowly helped to bring colour back into my world and a sense of achievement – to express myself creatively and feel like I was doing something, instead of nothing.

As I began to heal - a process that also included medication, therapy, yoga and strengthening my support system - I launched my blog and sometimes shared my story. Through my blog, I found that others had also experienced the healing benefits of crochet. My own story inspired my book Crochet Saved My Life, but it was the generosity of others willing to share their stories that motivated me to write it. Can you tell us about your experiences with mental health?
I realised in my late twenties that the difficulties I’d been experiencing for over a decade were due to chronic depression. For so many years I was hard on myself, thought I was lazy or should be able to be doing better: that I just needed to find the right things to fill my life with and then I’d be happy. I resisted any kind of diagnosis or medication.

Things got so bad that there was nothing more to do but try anything. I learned about what depression was and the things I could do about it. That’s my personal experience, but it has touched most areas of my life. Many of my family members and friends have dealt with mental health issues including depression, anxiety, postnatal depression, bipolar and more. I’ve seen it from so many angles.

How did you learn that others also found crochet helped them?
I started my blog Crochet Concupiscence in 2011 and quickly discovered that people reading it had also experienced the benefits of crochet. I started looking for what research was out there. There wasn’t a lot, and I’m happy to say that it’s something that is now more widely studied and shared.

Through the interviews I conducted for Crochet Saved My Life, I discovered that people had benefitted from crochet in both physical and mental capacities. I interacted with people who had conditions including depression of all kinds, grief, anxiety, panic attacks, OCD, schizophrenia, bipolar issues, alzheimer’s, short term and chronic pain, pregnancy related conditions, and a variety of chronic illnesses.

What effects does crochet have on the mind, body and soul?
The main thing that I think crochet does – both for myself and for a lot of people that I’ve interviewed - is it provides you with something to do that is creative, unique, special, productive and easy enough to be do-able, but difficult enough to allow for a sense of mastery.

Both mental and physical illnesses can make you feel incapable, not good enough, and bad about yourself and your perceived limited abilities. This feeds on itself; it certainly did in the case of my depression. Being able to create something, to do something that can be offered as a gift to others, that can beautify the world and even provide an income to your family when sold… this is invaluable to people who can’t take on a traditional full-time job because of mental health, physical health or old age.

It’s a way we can express ourselves while at the same time giving to others. This is immensely powerful. People need to feel that they contribute to their communities and families, and that they have something to offer, however small this might be. There are many benefits that crochet offers that have been professionally studied. It’s soothing and rhythmic, promotes serotonin release and calming feelings along with other meditative effects. It provides movement that can physically help with some finger, hand and arm problems. There are colour therapy benefits and somatic benefits to working with the texture of yarn. The focus it requires helps to distract the mind from difficult things. Ultimately, it allows you to create something tangible – which is what stands out for me.

What’s your new book Hook to Heal about?
In essence, Crochet Saved My Life is the story of how crochet helps to heal people, with accounts from people who have been helped in this way and research into why it does. Hook To Heal is an extension of this book in the sense that it’s about how to achieve those benefits. It includes 100 creative exercises, designed to encourage people to think about crochet differently and explore the ways in which you can utilise it. It offers tools and suggestions - not patterns - and encourages creativity, gentle self-care and a path to staying in touch with what works for you.

Your blog shares other people’s stories too. What has the response been like?
I always want to hear people’s stories about how crochet has helped them, particularly in regards to mental health. I conduct email interviews and share them on my blog. The response has been amazing. I never cease to be touched by the amazing stories that people are willing to share, and I feel a great honour in being trusted to share these stories with others. I’d like to tell you about the Mandalas for Marinke project. Marinke Slump was a crochet designer with Asperger’s and depression, who I interviewed for Crochet Saved My Life. Sadly, she had a relapse and committed suicide last summer. I was shocked and felt that I needed to do something to heal myself, help others who were feeling the same way, and honour her work. I put a call out for crocheted mandalas - a design that she was widely known for – and especially ones using her patterns. I committed to collecting them all and posting them daily to raise awareness about depression.

So many people reached out, sending not only mandalas but sharing their own stories of depression, suicide and mental health issues. It’s been amazing. I’m continuing to post these daily, along with information about depression to raise awareness. The response has been stunning and I am humbled by it. Do you feel like you’ve created a community online?
I believe that the entire craft community is one that already exists in the world, and is made up of every person who has crocheted before me and comes after me. We’re already a community, connected by our threads. My role is doing as much as I can to support and connect the work of other crafters, to strengthen the threads in the part of the community that I can reach. Hopefully this will ripple outwards and strengthen the entire web that connects us all.

Is blogging something you enjoy?
I love blogging as a medium, and it’s something I’ve been doing in various forms since the early days! It’s also something that I do for a living. I first started Crochet Concupiscence as a just-for-love project.

I’ll be honest, though, I put the hours of a full-time job into it and don’t make enough money from it to sustain it. It’s been alive for five years now and I’m constantly working on new ways to generate income so it can support itself. I recently joined Patreon, where people can support me with monthly donations, as small as one dollar, to help keep my blog going. What plans do you have for 2016?
I’m going to wrap up the Marinke project, host an art show of all the mandalas and release a photo book related to the project. I will also have to find a way to make Crochet Concupiscence stay workable, and hope that the Patreon funding will help.

I have some other projects in mind but will start there and see what happens! I’m encouraged to see that many more people are writing about and studying the therapeutic benefits of craft, compared to when I first started researching five years ago. I think we’re on the way to it being more widely acknowledged.

You can buy Crochet Saved My Life here and Hook To Heal here.