The perfect subscription to help you prepare for Knitmas. Access 300+ knitting patterns, 30+ how-to videos, knitalongs, workshops and more – all for just £25. 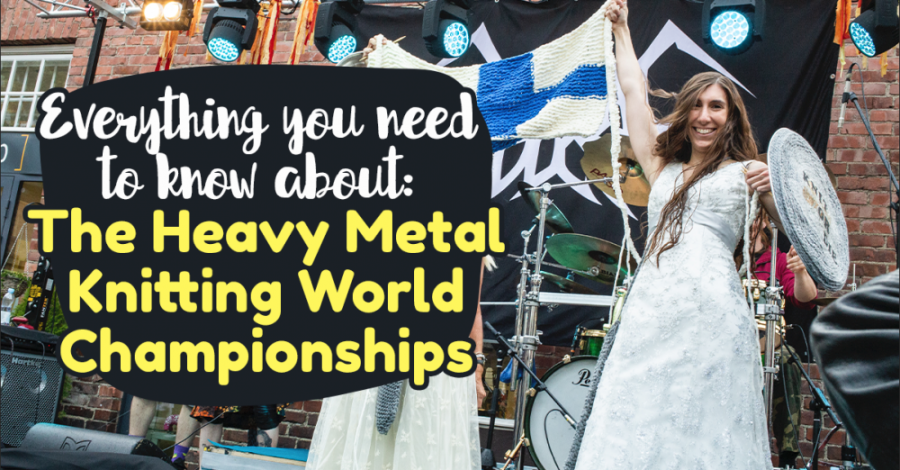 Heavy Metal Knitting World Championships: everything you need to know

As we prepare to depart 2019, it’s always satisfying to take a look back on some of the greatest things we’ve achieved in the last 12 months, and of course the not-so-great things – after all, that’s what New Year’s resolutions are for. It is with a little pride and a lot of disbelief that we can’t deny that this year has been sort of a big deal for the knitters in the world… and the heavy metal fans too. Indeed the title to this blog does not misread you, 2019 held the first ever Heavy Metal Knitting World Championships! And where better place to hold the event than in the heart of the largest heavy metal fandom and home of crafts, Finland. Here is everything you need to know about this rather intriguing contest before you sign up to enter for 2020…

We were all thinking it. By being crowned the first winner of the Heavy Metal Knitting World Championships, you will not only receive bragging rights – worthy on its own as a prize if you ask us – but also a weekend away in the authentic Finnish scenery with a hotel. No other details are provided but it certainly leaves a lot to be desired.

Where did it take place?

The event took place on 11th July this year in Joensuu, Finland. A quick Google search and visit to the Lonely Planet website will tell you that Joensuu is renowned for its student population, breathtaking canals and modern architecture. Next year’s competition is due to be held on 16th July 2020. Back by popular request we can only assume?

Apparently, the chosen location was no coincidence. Finland owns the largest heavy metal fan base in the whole world, and crafting is also hugely popular there too. According to the contest’s official website, you will find 50 heavy metal groups in every 100,000 Finnish citizens. Ahh, you must be thinking, it’s all slowly making sense.

The winners – Giga Body Metal, a group from Japan, were crowned winners. They were commended by the judges for how their performance had a story, combining their own culture, knitting and heavy metal. They took the space and their audience seriously but still remained crazy enough, just like it should be. From the pictures we can only assume that this somehow incorporated a Sumo element too, but if you want to know more, don’t fear – there is a three-hour-long recording of the whole event on their Facebook page to sit back, relax and enjoy watching! Second place went to Crafts with Ellen from Denmark and third place to 9” Needles from the USA. A truly global event.

What exactly is heavy metal knitting?

So essentially what you do is knit to the beat of heavy metal. If you’re thinking of applying next year, grab some heavy metal friends and practise bashing those needles together to the rhythm of the bass. Easy!

How do you win?

The entry acts were judged on many things. The main being: attitude, performing skills, how the performer(s) interact with their audience and their ”Heavy Knitting Hood” – we don’t know what that means either.) On the judging panel were three experts across all the relevant fields, Markku Pyykkönen, Creative Director of Joensuu City, the drummer of local trash metal band Maniac Abductor Jesse Räsänen, and PhD and university lecturer of Craft Science, Henriikka Vartiainen.

Who has organised the event?

The faces behind the event? Joensuu City Cultural Services, Joensuu Conservatory, Taito Pohjois-Karjalary and Marketing Agency Tovari are the main organisers and contributors. This event has brought together the likes of heavy metal fans, crafters and the lovers of the weird and wonderful which on a whole, can’t be too bad for tourism we suppose.

If you’d like to find out more about this simply crazy event, check out their website heavymetalknitting.fi or, get practising for next year’s tournament with some of our fabulous knit patterns at letsknit.co.uk. Or alternatively, if you’re a lover of all things crochet, have a look at one of our latest patterns, Pandora Penguin!