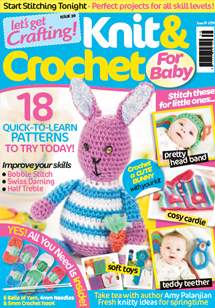 We have received an amendment from the designer for the ‘jumper section’. Please accept our apologies for any inconvenience caused.

Please also note that because the base is worked as a spiral, the number of stitches in each round is no longer consistent

Please see the following amendments for the ‘Fronts and back’ of the comfy cardigan.

Apologies for any inconvenience caused.

You're almost there!
Please check your emails to confirm your subscription